A couple of days ago I saw there was a book on Kindle that looked like it might be interesting... 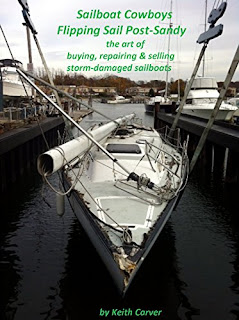 This one in fact.

At $2.99 it was something of a no-brainer so I downloaded a copy to my Kindle and read it in a couple of hours.

It's an easy enjoyable read and contains a lot of information that flies in the face of what a lot of people say. Stuff, as it happens, that actually needs to be said.

Whether you want to flip boats or not is unimportant as the real meat of the issue is simply how to approach boat work and get the boat up-and-sailing in a timely, affordable, and seaworthy manner.

In short a whole lotta good advice for just under $3.

That said, surveyors and boat brokers will really hate the book. Of course, from where I sit that's just the cherry on top.

I'm currently in the midst of a variety of projects which, if I were not a cheapseats VolksCruiserish sort of fellow, would cost an arm and a leg to sort out...

One project is pretty simple: replacing the hand rails on the coach roof to make space for our new nesting dinghy. The old ones are somewhat past their sell-by date. Off-the-shelf teak replacements would cost on the order of $50 a pop and of somewhat diminished scantlings that hardly inspire confidence, had me looking at stainless steel hand rails which were silly expensive.

Going to the local lumber yard I bought enough clear pressure-treated yellow pine 1" x 3" stock to build new hand rails for $10 and change. Add in some epoxy (maybe $5 worth at the price/volume level I'm in) and a couple of hours or so of sweat equity and I've got a new set of robust hand rails that will do the job far better than anything available retail for around $7.50 a pop.

So yeah, hand rails are just one item on the list of boat things one tends to throw money at but it is a pretty good example of the process of not spending more than needful on boat stuff otherwise known as the VolksCruiser two-step. Let's go back and look at the details...

First, we do a Need/Want. Do I really need to replace the hand rails?

Yes, they were always too light duty for the job and years of being in the tropics have taken their toll. They were teak which is a not very good wood for hand rails as it is neither as rot resistant as believed to be nor very strong.

Second, we do some research to see what's available as a replacement and costs only to find what's available is either too expensive, too light duty, or both for the intended purpose (namely keeping aboard the boat when all hell breaks loose). So, going the DIY route is actually the only thing that makes sense.

Building hand rails is as simple a project as you can find. My method of choice is to laminate two pieces of pre-cut one by stock together, clean up and round over the resulting hand rails with a router, and then lay on three coats of epoxy to prepare them for painting. Dead simple and fast.

Now I'm sure I'll get some questions about the pressure treated pine (often referred to as "Miami Teak") so to answer those questions I'll just say pressure-treated pine is much more resistant to rot than teak in general. It's stronger and coated with epoxy, it is even more rot resistant and strong. On the fact that we're painting the hand rails, it's because the paint will protect the epoxy coating from UV and exterior varnishing is more something you'd find on a "Y-A-C-H-T" and is the antithesis to the VolksCruiserish thought process.

Rule #3: If you have to fix something or replace it, DIY it whenever possible but do your research first so you know what you're doing.

Rule #4: Keep in mind that a lot of common knowledge (teak being a good example) is just plain wrong. Do your own due diligence and be wary of your sources.

Yep, simplistic as all get out but, if you mostly follow those suggestions, you'll save a very large chunk of money and improve your boat in the process. More importantly it gets you out of the "Just throw money at it" mindset.

The fact of the matter is that the process is not so much to save money as it is about doing the right thing for your boat. Providing we've done our research correctly, we're actually saving a lot of money as a bonus.

What everyone seems to do...

Have you noticed how many YouTube channels there are about people downsizing, buying a boat, fixing it up, and sailing off into the paradise of Patreon fueled bliss?

If not, you really should check them out because they are very educational for the most part.

One of the things you'll notice is there seem to be certain rites of passage that everyone goes through and rules of sorts that, like it or not, apply to the whole "Buying a boat, fixing it up, and sailing off into the sunset" gig...

Whatever boat you buy or how much you spend will require lots of work and money to fix up.

Everyone underestimates the amount of work and money needed.

Nothing involved in the process is rocket science and can be accomplished by just about anyone.

Everyone makes mistakes (though some make more than others).

Most people on boat projects don't do enough research/homework of the right sort.

Sure, I know, rules are never concrete things in this life but they do exist even if it's just to give us a hint of what may lie in store for us. Forewarned is forearmed so to speak.

That said, rules often send the wrong message as the big picture does not always reflect a specific projects specific details. Especially if you're embarking on a VolksCruiserish project.

Yeah, VolksCruiserish rules are going to be a little bit different.

More about that on Sunday.

In the last couple of weeks I've noticed a lot of hurricane related boats and gear coming on to the market down here and like Rod Stewart reminded us way back when...


every picture tells a story. 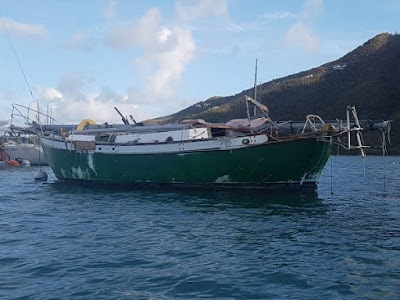 In the case of the Westsail pictured it's beat up, forlorn, and a whole lot of work to make it right but there's life in the old girl yet. That said, it is not the sort of project that is suitable for most folk and for most folk it would be the project from hell.

Of course, most folks don't read VolksCruiser or, for that matter, have a clue.

As for my take on such a project it's doable for a lot less time and money than you might expect. Though, admittedly, just the sort of enterprise that would test one's mettle, sanity, and perseverance.