on the subject of free boats...

Every once in awhile I'll get on Search Tempest and type in the words "Free sailboat" just to see what happens...

For instance, in Florida, there's a San Juan 24 without a working motor, another guy with a bunch of Catalina 22's, and a Seidelmann 30 footer in need of some work all going for free.

Up in Maine there's  a wood 30-foot Casey Cutter that would make an interesting project and in Erie PA there's a Pearson 28. 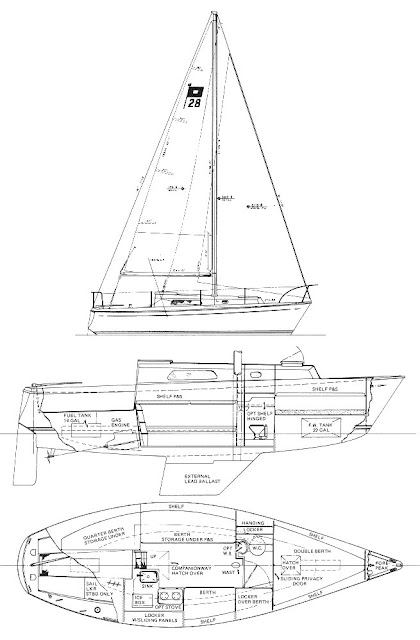 Of course, I'm pretty sure that if I used a different search terms like "fixer upper sailboat" or "Project sailboat" I might find a few more but the main thing is that there always seems to be some OK boats going for free among the thousands of sailboats for sale on Craig's List.

The real trick in finding a good boat for free or super cheap is to look around for boats that have issues for the current owner. Most of the best boats I've seen going for free are not actually in bad condition but are boats that are costing the owner money to sit in a yard or at a dock which are not getting used or boats that have a single issue (say a motor that doesn't work) where fixing it would cost the owner more than the boat would sell for and the boat is still costing the owner for it's storage or marina slip.

For the most part a boat without a working engine or a mast is pretty much unsellable and while you'll find a lot of boats for sale without rigs or motors you will find that almost all of them will still be for sale next year, the year after that and, well you get the idea.

The thing is, it really helps you to put yourself in the owners shoes and do the math to sort out whether the boat in question is a liability  to the point that giving it away actually makes financial sense or not. Of course, the other reason you need to do the math is to figure out whether the boat would become a financial liability for you or not.

A few more thought on the subject tomorrow...

So, you want to build yourself a VolksCruiser...

As it happens, I really enjoy building boats.I find the whole process of boat construction both a creative outlet and deeply satisfying on an emotional level.

That being the case, I often recommend to a lot of folks that they might want to think twice before building a cruising boat because there's a steep learning curve. It takes a special mindset to build a good boat and not everyone has what it takes.

Which is not to say I'm one of those sad people who hang out on forums telling folks that building your own boat is a project that only an idiot would attempt, it will take a decade or more to finish, and when the dust has settled you'll have spent more than a new boat would cost. My advice is more along the line that building your own boat is a great experience, which can save you some money, and be done in a timely manner providing you have your shit together sort.

Which leaves us with the perennial question...

Do you have your shit together?

The truth is that this is a question I ask myself on a pretty regular basis. It's a go to mantra of sorts because, in my case at least, I need to keep track of what sort of condition my condition is in*.

The hardest part of building a boat has less to do with one's abilities to do dovetail joints or perfect scarfs and everything to do with keeping your shit together in the midst of a gazillion interlocking, yet contradictory tasks, which is otherwise known as project management.

Take a look at the folks around you and, I suspect, there are people who can manage a project and others who can't even manage to do even simple tasks without some involved drama.

Another reason boat projects fail is that the builder can't follow the plan. One of the most common questions I hear about boat building is something like "I got the Bolger AS29 plans but think I'll substitute the rig from a Catalina 30 and maybe add an inboard diesel engine. What do you think?" sort. One of the things I love about building a boat is I get to follow a plan that makes sense which is a wonderful thing considering that managing a boat building project is often an exercise that makes wrangling cats seem simple.

The fact of the matter is the backbone of any successful boat build is the plan and the minute you start questioning the validity of the design chaos ensues.

The last issue that is seriously problematic for the build is that not everyone is good at doing consistent productive labor. Take a look at one of my favorite Wharram designs the Tiki 30 which is really a nice little cruising design. According to Wharram, the design requires around nine-hundred hours of labor to complete which is an average as some folks take longer, some take less, some are part-time and some folks work full time. Now, anyone who actually works for a living has already figured out that nine-hundred hours is between 22-23 forty-hour work weeks.

Building boats is just like working for a paycheck. It's all about the labor. When building the Wharram you don't get to count time spent looking at that big pile of plywood pondering which part you'll cut out first, daydreaming about how awesome it will be sailing the cat in the Caribbean, or redesigning the design so it looks more like a Gunboat. Nope, you only get to count the hours you actually worked that produced stuff.

Admittedly some people are not all that great at being their own taskmaster and that's OK as long as they realize that doing an hour here and a few hours there doesn't get a boat built in any kind of timely manner, if at all. On the other hand, if the builder is self-actualized and can put in productive eight-hour days, not only will he have a successful build but also be able to send "Having a wonderful time in Pago Pago" postcards to all of the naysayers who said that it's stupid to build a boat.

Like I said, building your own boat is not for everyone but for those who can, it rocks.

Multihulls are HIP and as a result multihulls demand a higher price and this includes used boats. Which, I suppose, is good news if you happen to be selling a catamaran but bad news if you want to buy one. In my opinion, multihull prices are mostly inflated and don't quite reflect their actual value.

The big question for me is whether or not the hipness factor of a 52 year old geriatric catamaran is worth the extra cost. The fact is if you were to base the value of the Iroquois on its displacement which, by rights it should be you'd be able to buy the Iroquois for around $2 a pound which would be along the lines of $13K which is very close to several other Iroquois cats I've seen over the last few years.

Most builders I know tend to budget a sailboat based on how much it weighs and not so much on what you can sell the boat for. Working out what a boat is worth in terms of weight/displacement is a great way to sort out what you should be willing to pay for a given multihull.

So, what's a person going to do if he/she want a multihull on a VolkCruiser budget?

Well for starters, I'd take a look at smaller designs like the Heavenly Twins, Iroquois, and Prout Sirocco because they're good boats and long enough in the tooth and in a less-than-hip size to have a few out there at reasonable prices.

If those boats are a bit small for your tastes you might check what you can find in the 30-35 foot niche but be warned that deals are very few and far between.

While I've not mentioned multhulls of the DIY sort I'll go on record and say that finding an inexpensive multihull in the under 40-foot niche is, more than likely going to be a DIY boat. The downside is that a lot of folks consider home-built boats inferior and, to be honest, there's a valid reason as the old adage of...

"You build your first boat for your worst enemy, the second for a friend, and the third for yourself."

... which has more than a passing resemblance to reality and, as a result, there are some truly heinous examples of boat butchery laying in wait with a "For Sale" sign laying in wait for the unwary.

More on the subject of home-built designs, what they should cost and building yourself in the near future...