Taking a hard look at what's needful inside...

I'm a big believer of the old adage of "If it ain't broke don't fix it" and that very much goes for the Columbia 26 MK2...

That said, there are some issues that I think are needful to deal with if you're going to make the C26 your VolksCruiser of choice and they are mainly about improving livability and storage which actually turn out to be the same thing. The hardest part of living and cruising on a small boat is really just finding a civilized means of stowing the stuff you need. Which, sadly is a lot harder than you may think.

First of all the C26 comes with water tankage not anywhere close to needful proportions... a scant 12-gallons and it would be the first thing I'd put on the list to sort out. Hey, water's needful stuff.

Secondly, I'd look to improving the stowage in general. The C26 is better than most boats storage wise of its ilk but there is a lot of wasted or potential space that could make the difference between cruising in a civilized manner or not. Personally I'm not a big fan of the "not" alternative.

While thinking about stowage the third thing we really need to sort out is a better galley situation. While it is a very efficient use of space as it stands, it is not a happy making situation for someone who wants to cook real meals on a regular basis. There's plenty of room for improvement as long as we're going to be maximizing stowage.

The head is also something we might want to look at...

Surprisingly that's pretty much the important stuff. Bill Tripp knew what he was doing when he designed the boat and pretty much everything works the way you'd want it to. We'll talk in more depth on just how we might go about increasing the water storage, maximizing needful gear stowage, and improving the galley situation but for now we will let that percolate till later. The next thing we'll look at is the rig, sailing systems, and auxiliary propulsion.

It's funny how some posts will fill up the mailbag and it would seem a lot of folks are interested in my thoughts on turning a Columbia 26 into a VolksCruiser. On the other hand, a lot of folks also wrote to tell me that the Columbia 26 was just too small because they "really needed a...", "there's no room for a...", and "but it's not a catamaran..." or other such things.

What can I say but life can be disappointing...

First things first... It's a small boat though, to give it its due, it's a pretty big 26-foot boat when compared to most its age. The real question you have to answer is whether it's big enough for your purposes. Personally I've lived (with my better half) and cruised on a similar sized boat that was less roomy for several years and don't recall any issues that were problematic or deal breakers. The bottom line is that it's a pretty sensible boat for someone who gets the whole simplicity thing and realizes that it's a boat and that living on a boat is not the same as living on land nor should it be.

Of course, no boat is perfect and the beauty of rehabbing a cheap classic plastic production boat is you can adapt it to your needs to your heart's content. Since it's a small boat it won't cost you a lot in materials or labor to put most things right and if your ideas don't work out you can simply redo it.

In my mind there's nothing really wrong with the Columbia 26 but there are some things I'd think about changing... We'll get into that next time.

A project on the drawing board...

A friend and I have been discussing an idea I have for rehabbing an old small classic plastic design and turning it into a VolksCruiser...

The boat in question happens to be a Columbia 26.

As it happens I've always liked the Columbia 26...

Studying the current crop of the C26 for sale floating around, my calculator tells me that the price for a boat in good or better condition falls somewhere in the $3-6K zone and we might safely say the average is right around $4500 (+ or -).

The $2000 boat I have my eye on however is a far cry from being in good or better condition and the amount of money needed to make it right, not to mention the large amount of labor involved, actually makes it quite a lot more expensive than the various boats in that $3-6K zone. My hope is that the guy who's been selling it for a couple of years now will wake up one morning and just sell the thing for what it is currently worth (about $500 or so) in which case I'll pounce.

So, what would I do to turn a fixer-upper Columbia 26 into a proper VolksCruiser?

Five, count them, five good reasons you need to be reading Comet Camper.

A Benford Badger, some progress, and a lot of work...

Here's the first footage I've come across of the Barros Pop 25 floating right side up and sailing...

Plus here's some in depth coverage from the Brazilian Nautica magazine on the Pop 25 with English synopsis (though Google translate might be a help for those who are Portugese challenged).
Posted by RLW at 11/14/2014 08:00:00 AM

Here's someone who is seriously rocking the beer can stove envelope!

On not fitting in...

Voyaging belongs to seamen and to the wanderers of the world who cannot, or will not, fit in.

The greatest fear about the idea of a VolksCruiser type boat and lifestyle I hear voiced is whether or not they will fit in with the cool kids cruising community.

I get that. Face it, nobody wants to return to the world of high school cliques and despair (well, unless they can return as BMOC or Homecoming Queen and some do seem to try). The thing is, if you're worried about fitting in that's just your spidey sense telling you that you might not.

Your spidey sense just might be right as it happens...

The cruising community is composed of any number of cliques, gangs, posses, clans, and other assorted assemblages of folks just like high school.

I remember talking to a guy once who told me he had bought an Island Packet because he thought it was the perfect boat to fit in... Somewhat upmarket but not pretentious, sorta/kinda traditional but modern, a semi-anonymous boat that should fit in at any anchorage or so he thought. The problem, as he told it, was he apparently had bought the wrong dinghy and he felt ostracised, even within the Island Packet clan, because, since he liked to row, he'd bought a Trinka dinghy... The happy part of the story is that being a rower and Trinka guy he met a lot of like-minded folks, made some good friends in the process, and became one of the cool kids...

While sailing our Loose Moose and Loose Moose 2 (boats guaranteed to scandalize any anchorage) we did run across people who had issues but they tended to be, generally speaking, fools, idiots, and people of limited vision... Certainly not folks we'd choose to hang out with in any case. On the other hand, having an "odd" or "different" boat opened doors to a lot of great people we never would have met if we'd been in just another fiberglass bleach bottle.

An article you really need to read...

Over at Comet Camper there's a great post that anyone considering the whole cheap-seats VolksCruiser thing should should read and take to heart...

A stove with VolksCruiser written all over it...

Stoves for boats are silly expensive. Not only do they cost more than they should, most of them don't work all that well either.

Here's a better and more affordable than most single burner alcohol stove... 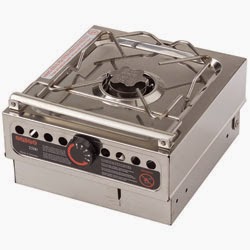 While this beer can stove costs pretty much zip.

How To Turn A Beer Can Into The Only Camping Stove You'll Ever Need from Tom Allen on Vimeo.