Yesterday, over at Boat Bits, I mentioned a pretty cool new bit of electronics from Velocitek which has me drooling...

Hey, I may be Mr Cheapseats but I still like really cool stuff!

So, I did some need/want addition and, sadly, it's not really something I need. Even more interesting after doing the need/want calculations I realized that I don't even want it as it's just a machine telling me what my brain already knows.

That said, it would actually be a great learning tool for newbie sailors of the cruising sort to learn how to tack and sail to windward better. So it is something to consider.

About that need/want thang...

What do you actually need from a cruising boat?

It's a hard question. Mostly because it varies greatly from person to person and further complicated by the fact that most folks these days never really learned the difference between need and want...

Personally, where I'm concerned, comfort is a big part of the equation and I'm not going to put a lot of effort into a lifestyle that is uncomfortable... Would you?

Take Lin and Larry Pardey's boat "Seraffyn" reading "Cruising in Seraffyn" does not paint a picture of a couple sailing around the world being uncomfortable or unhappy. At just a kiss less than 25-feet, Seraffyn seems to have been a comfortable cruising boat and home.

Of course, a 25-foot boat is not for everyone but it does make an excellent case that with the right mindset and some better-than-average organizational skills it's a doable option.

I get that a lot, the "everybody says" you need a bigger/more expensive/multihull/monohull/long keel/fin keel boat blues.

As far as I'm concerned, all you really need to do is get a boat and whatever you get will, more or less, work out.

I've also been told that saying this is dangerous, sailing is a serious business, and this sort of advice is akin to giving people scissors so they can run the 100-yard dash...

The important thing to keep in mind is any number of people have gone off sailing on all sorts of boats with shockingly small budgets and if they can do it so can you...

and about that two-edged sword...

Which works out finest kind for folks like me!

Seriously, think about that for a moment or two...

In some cases I've even come across stuff that was brand new in the box because the wonk never had time to install the item before the new bestest product came along.

What can I say but being a slave to the consumer god can be a bitch.

So, when outfitting your VolkCruiser all you need is a little patience, a sense of the need/want equation, and the ability not to get sucked in to the consumerist trap. Do that and you can have as good or better than you need at pennies on the dollar...

On doing the math...

Bumfuzzle makes a good point about doing your math and it's well worth a quick read...

Face it, being a person of the VolksCruiser non-consumerist ilk means what things cost is always an important factor whether it's the price of oil, what a depth sounder costs, or the damage a few gallons of epoxy is going to do to your bank account. The bad part is that the deck, so to speak, is stacked against us.

Firstly, there is the pervasive old wives' tale/urban legend that you always get what you pay for and the more you spend the better something is. It is just plain stupid because the price of something these days has bugger all to do with what an item actually costs and everything to do with what someone has decided they want to sell it to you for.

Secondly, there is the stigma element. No one wants to be seen as unable to afford stuff and the disdain/abuse you get can be brutal when asking if, perhaps just maybe, there is a less over-priced alternative to the product in question. I might also add that it is often quite ironic as the salesman giving you attitude is, more than likely, making such a minimal wage that he/she could never afford most of the stuff they sell...

Then there is the sad fact that a great many consumers have been conditioned to not do simple math when it comes to buying stuff as in the gallon of oil for  $26.99 versus the four quarts at $6.41 that Bumfuzzle ran into.

Throw in the fact that people who make and sell stuff play very fast and loose with the ethical side of things with inflated list prices, confusing specs, and any number of minor cons to keep you from actually looking too close at the actual product that it is nearly impossible to make an informed choice.

The yachting press used to do real reviews of gear and suchlike but these days, mostly what you get is simply regurgitated press releases from the companies morphed into a "review". That said, for those looking for real reviews that will open your eyes, you might want to check out the British and French sailing magazines who still do real tests and seem not to care if they might offend/piss off their advertisers.

The real trick to surviving in the VolksCruiser world is to do the math on what you need, what you can afford, and figure out how to make those numbers work together happily. The good news is it's not very hard as long as you can cut out the hype because rampant consumerism is a two-edged sword that cuts both ways... but more about that next time.

I overheard a couple of people discussing dinghies the other day and it made me realize just how much stuff has changed...

I know it dates me but back when the cruising bug first hit me in the 70's, dinghies were things you rowed. The 98-foot LOD schooner I was working on at the time had two dinghies, a six-foot pram and a 14-foot lapstrake pulling boat. As I recall, we got along just fine without an outboard and as far as I can see nothing has really changed to make it any different.

The other thing about having a dinghy without a motor is I don't have to worry about it being on the dinghy dock when I'm out shopping or running errands.

Our current dinghy is a Phil Bolger/Payson Big Tortoise (plans from "Instant Boatbuilding with Dynamite Payson") which is the maximum volume and utility you can get out of two sheets of plywood, twenty-dollars of 1" X 2" stock, and some resin/glue of some sort. It works really well, is stable enough that I can fly fish standing up without hassle, and it rows a lot better than anyone expects.

The real advantage is that it allows me to be part of the environment that is mostly missed by the other cruisers flitting from boat to shore in a perpetual hurry with their RIBs and 15hp and over outboards. I get to see rays, turtles, and birds on a regular basis and I like that.

Every once in awhile I check out what CAL 34s are going for...

One reason I do it is I like to see what others have done to their CALs and I like knowing what the current going rate of CAL 34s happens to be.

For those who might be curious, there are quite a few Cal 34s in seemingly OK to good condition in the $8-10K zone, a handful of straightforward fixer uppers in the $3-5K bracket, and a few pretty awesome examples of Lapworth's genius for around $15-27K.

I expect you'll find the same sort of pricing with most models of US-built, classic plastic of the same ilk from the late sixties and early seventies.

A blog with the right attitude...

A boat worth considering...

A good example of a cheap boat deal that makes some sense...

A reader of like mind dropped me an email the other day...


"Found this boat on eBay a few weeks ago, I was second bidder, it sold for $260.. I think it may still be available if you know anyone who would be interested. Looks like a pretty easy fix, no sails but a Catalina 27 set of sails are a nearly perfect fit. I have had two of these Watkins 27's over the years, and presently setting up a Watkins 29 now, these boats are nice cruising boats as long as you are not in a big hurry."

He included a screen capture from the eBay auction as well. The downside was that it had a dead engine and no sails while the upside was that it looked to be in pretty good shape otherwise. 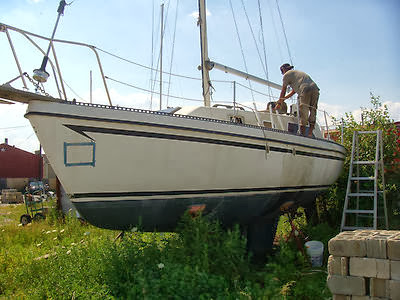 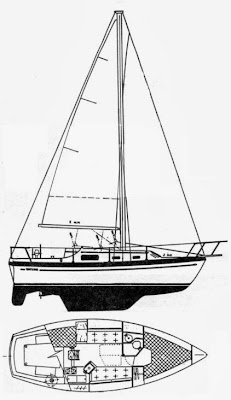 The Walter Scott designed Watkins 27 is actually a pretty nice boat. Beamy for it's length, it packs a lot of space into that 27-foot envelope. So, while you might not win a lot of races, it will be as comfortable to cruise as any 27-footer.

Obviously you'd need to buy sails and that would run you anywhere from less (possibly a LOT less) than a thousand dollars for good shape used sails to around $3500 for a new set.

As for the engine, I'd opt for a small outboard or, even better, simply use the dinghy and it's outboard parbuckled to the aft quarter for those odd times you need to get in or out of someplace under power. As a bonus losing the inboard chunk of metal will make the Watkins perform a whole lot better and give you some valuable stowage space.

As to the boat itself there are any number of projects, upgrades, and repairs most might want to do but it's only a 27-foot boat and none of them, done intelligently, should cost very much.

For those of us on VolksCruiser budgets, it's hard to argue with the fact that the best bang for the buck is going to be a sharpie...