some more quick thoughts on designing a VolksCruiser that makes sense...

Now that you've had some time to think about the lug schooner rig (though we'll be coming back to it in a post or two) let's look at the other big chunk of a budget for a cruising boat...

Of course, it's been proven that a couple can cruise pretty well on a small boat without an engine. Lin and Larry Pardey being the obvious example but over the years we've come across a lot of cruisers who have successfully cruised boats without engines. I won't get into it but Jay FitzGerald makes a great case for the engineless sailboat in his book Sea-Steading and it's well worth the read.

What's not to love?

Well, outboards do have some issues...

For one, deploying an outboard on a sailboat is always a pain in the butt hassle. Whether it's in a well or on the transom it is going to be problematic to get the prop in the water and start the engine. Most folks with outboards simply don't bother and just become better sailors simply to avoid having to deploy the outboard in anything less than needful situations.

Secondly, outboards are not as efficient as an inboard diesel which becomes severely problematic if you want a motor boat with sails and are one of those folk who tends to turn on the motor when the wind lessens a touch or simply can't be bothered to take your sail covers off. For sure outboards don't make sense if you want to make long passages under power. I might also add that if you really want to make long passages under power that sailboats don't really make that much sense either.

Lastly, outboards use gas and most of us don't like carrying a lot of it around and stowing the stuff safely can be a hassle but, I expect that Tad will have some super cunning storage plan for stowage of a couple of outboard tanks (and maybe a jerry can as well). Of course, being a sailboat you won't be needing silly amounts of fuel because you're going to be making passages under, dare we say it... sail.

So far we have an inexpensive but powerful rig and a capable affordable auxiliary propulsion system... Find out what else is on offer next time.

Some quick thoughts on designing a VolkCruiser that makes sense...

I was recently involved in a discussion about what features a boat should have to be a successful VolksCruiser... It was a problematic enterprise.

The hard part in discussing an enterprise of frugality in a consumerist world is that there is almost always a certain disconnect of logic. Face it, anyone with a consumerist mindset answers to all problems is to spend money...

For instance, I was advised that to save money on water (we spend 10 cents a gallon) I should spend around $5000 for a good watermaker (plus an unspecified amount for maintenance and replacement parts) and that would save me loads and loads of money. Then again, if you were to factor in the amount we actually spend for water a year (less than $200) the idea of a watermaker actually saving us money becomes a rather ludicrous endeavour.

Sadly, far too much of the "you need this/that to go cruising on a budget" advice tends to fall into the ludicrous category.

So let's look at a boat that actually seems to get it right... 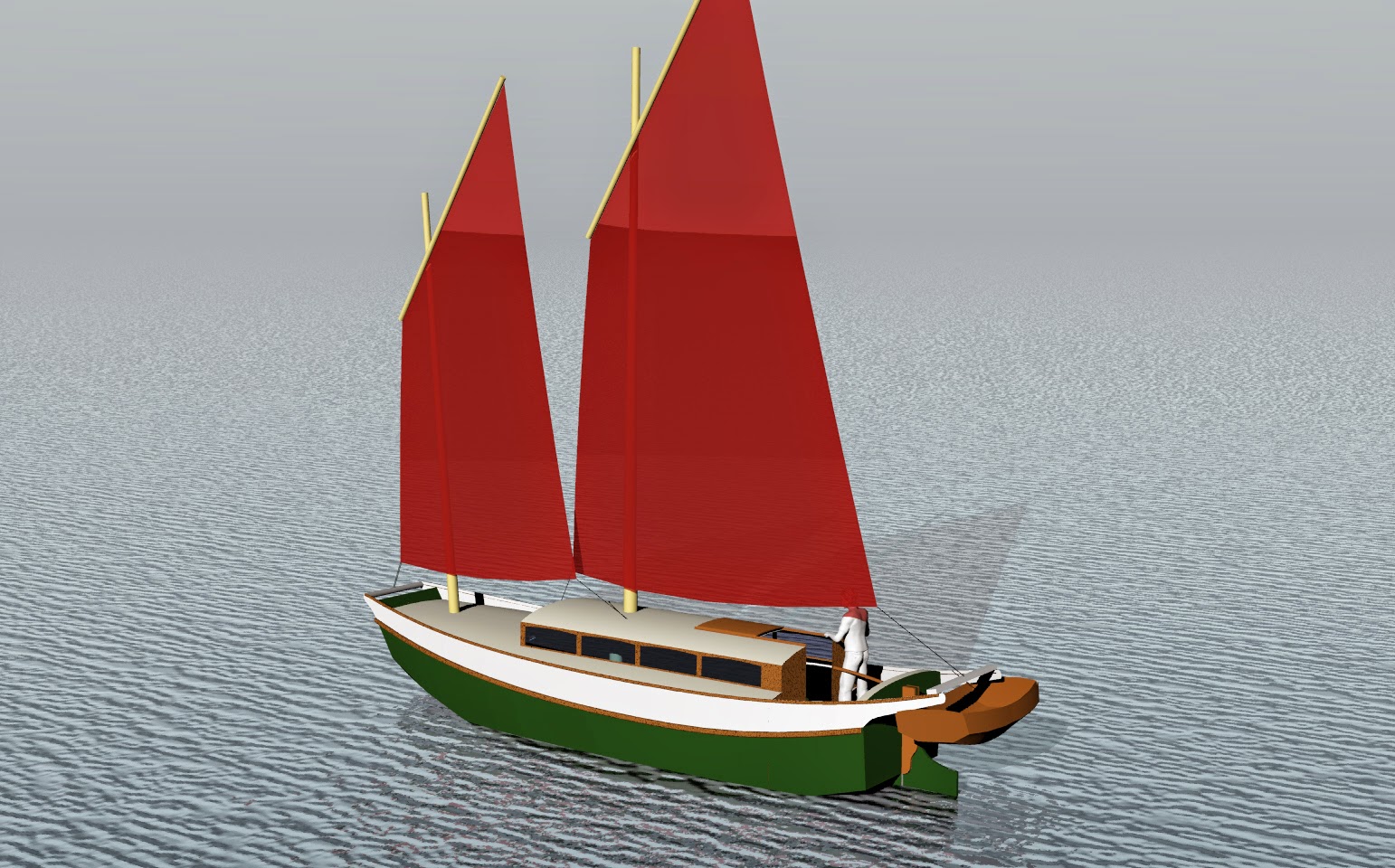 Today we'll look at the rig and see how not spending money helps it be a better cruising boat.Tad Roberts chose the balanced lug for this design and it makes a whole lot of sense

The schooner rig with lug sails is small enough in area that you also don't need any deck jewelery of the winch sort... Another huge savings of money. With a few blocks, any healthy person should be able to raise the sails and trim them without any added mechanical advantage, That said, a couple of small (say size 10) winches for the halyards picked up at a swap meet for cheap would be no bad thing but the bottom line is they simply are not needed just a nice touch.

Lug sails (whether junk or western lug) are fairly easy to home-build, easy to repair, and don't require any expensive sail-handling gear purchases. In terms of horsepower to dollars ratio, the western lug rig is nearly at the top of the list (FYI for those of a Bermudan rig bent the Bermudan rig can be found way down near the bottom).

Last, but not least, the masts, booms, and yards are all DIY friendly so you're not going to to have to pay high marine pricing for the rig.

So, in essence, Tad's put together a very seaworthy, powerful, and affordable rig by getting rid of stuff you don't really need.

This rig makes a lot of sense.

Next we'll be looking at some more choices made on this design...

Yesterday, over at Boat Bits, I mentioned a French boat I like that I thought was overpriced... Then again, some astute observers might point out that I think almost all boats are seriously overpriced. I'm just that kind of guy...

As it happens, the Mojito 888 is a great boat for folks of the VolksCruiserish persuasion to study because its simplicity of interior construction and design should make for a very inexpensive solution to fitting out a homebuilt boat or rehab project.

For instance, just check out the galley... 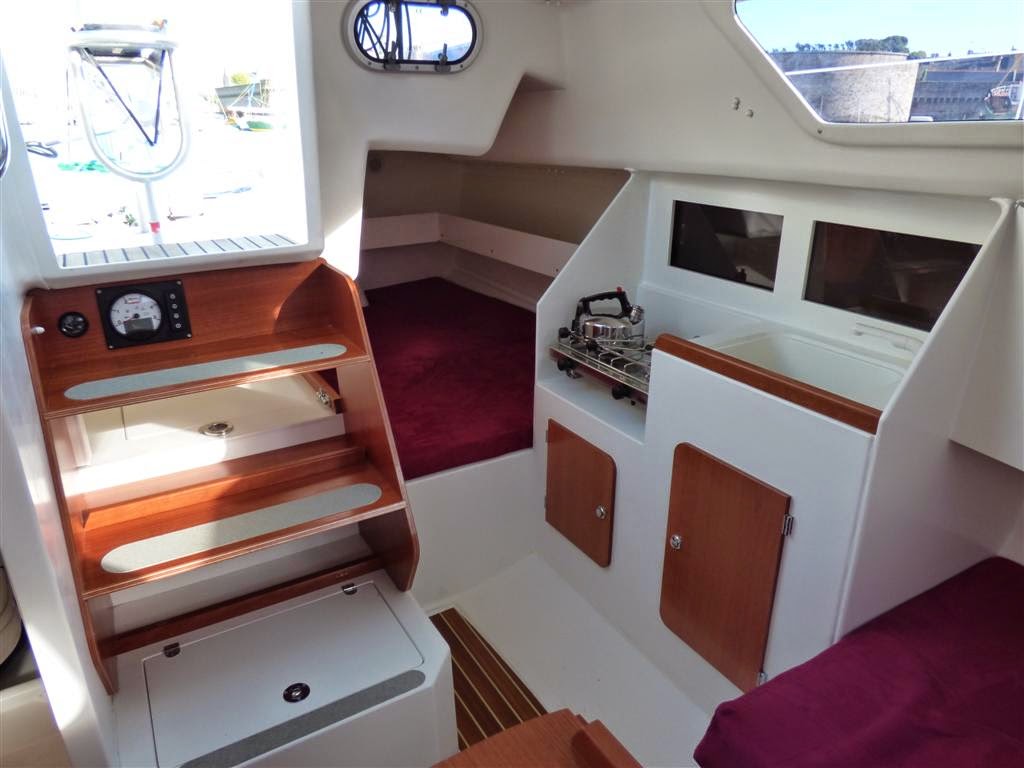 It's real simple... There's plenty of room for the pots/pans, utensils and tools you actually need/use and with a little tweak or two could be a whole lot better. The important part is that it's simple, does not use a lot of expensive material, and can be built in a long weekend. Fact is, there's not a single chunk of the interior of this boat that can't be built in a weekend or so.

Of course, this sort of simplicity flies in the face of the prevailing mindset where where folks are trying to make boats into houses, luxury condos, or shrines but, as far as I'm concerned, if I wanted a house I wouldn't be on a boat.

As far as the Mojito goes, they got the simplcity right but somehow forgot to apply it to the price... Bummer that. On the other hand, the fact that it is a bit pricey as well as being the Voile Magazine "Boat of the year", will give simple seaworthy interiors a certain "Hipness"factor...

Now if you were to apply a nice simple interior to Tad Robert's new 28-foot scow schooner you'd be way ahead of the game... 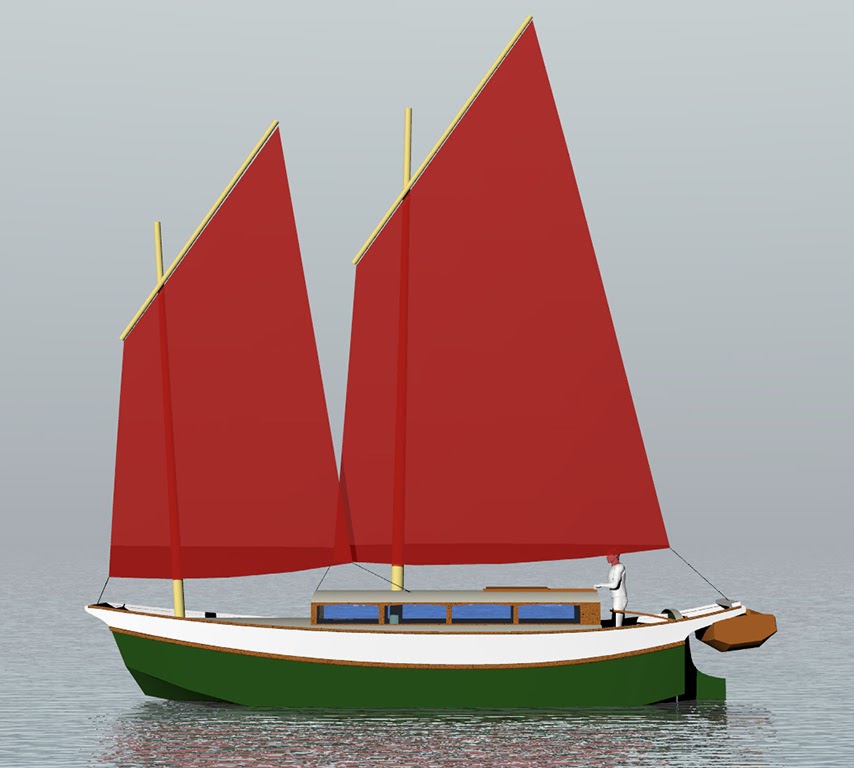 I'll be talking a lot about Tad's new schooner in the next few posts...

Or so goes the refrain from Tower of Power's best known song (as well as being one of my all time favorites).

If you were to read today's modern yachting rags you'd think that ever bigger and ostentatious catamarans were the epitome of Hip and, in some circles, you'd probably be right.

Of course, that trend has already peaked and even in the yacht press they're casting about for the new h
Hip thang. Tower of Power pretty much nailed it...

I expect that, sooner, rather than later, overly conspicous consumer products are not just going to become no longer Hip but decidely UnHip... The signs are already there if you have your ear to the ground.

That said, while smaller more frugal boats may never be the epitome of Hip they'll never be the more dreaded UnHip. I can live with that...

Just something to think about while you listen to the band...

Stuff you need to know...

Off Center Harbor has a truly excellent two part video on sail trim featuring Carol Hasse that you might want to check out... It's well worth the price of admission.
Posted by RLW at 10/07/2014 10:46:00 AM

I've been reading "Building the Uqbar Dinghy" and it really is a great book for those who want to build a good dinghy in a weekend... Yes, really, a weekend. 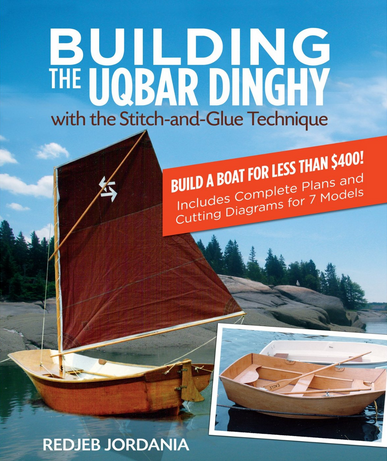 Fact is, I like the dinghies so much I'm pretty sure I'm going to build one in the very near future. The only problem being which dinghy (there are plans for a six, seven, eight, and ten-foot dinghies within the book) I'll choose. I suspect it's a toss up between the eight or ten footers but the six-footer is truly sweet and, as we've successfully cruised for years with a six-foot Bolger Tortoise, to say I'm tempted would be something of an understatement. 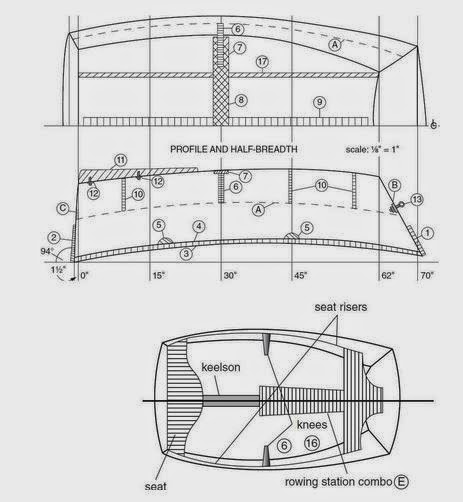 Lot to be said for a dinghy that does not take up a lot of space and only weighs 35 pounds.

What really struck me about the book was how well Redjeb Jordania made the building process simple. I suspect the fact that he's taught a lot of dinghy building workshops gives him an edge on making the content of the book tyroproof.

Better yet, I just noticed the price has come down for the Kindle format version and four complete boat plans with step-by-step information on how to put them together for less than $10 is some kind of serious deal...
Posted by RLW at 10/05/2014 11:10:00 AM

The other day a friend wrote me complaining that the boat project he was thinking of building was getting scary expensive and he used winches as an example. The winches spec'd out for his design, even with a deep discount added up to somewhere just shy of $7K.

Quite an "ouch" factor for a small boat less than thirty feet...

Of course, being an aficionado of alternative rigs, I was quick to point out that it would be easy to adapt the design to balanced lug and dispense with the winches entirely. This would also get rid of the not insubstantial cost of standing rigging as well.

In his case I'd still fly a small blade jib set flying because it's a big help with balance but mostly because a small jib does wonders for the balanced lugs windward performance with the only downside being the addition of a forestay and running backs.

Not that I expect him to go with the balanced lug but it does give you an idea that if you want to save serious money on a boat it makes all kinds of sense to think simple... 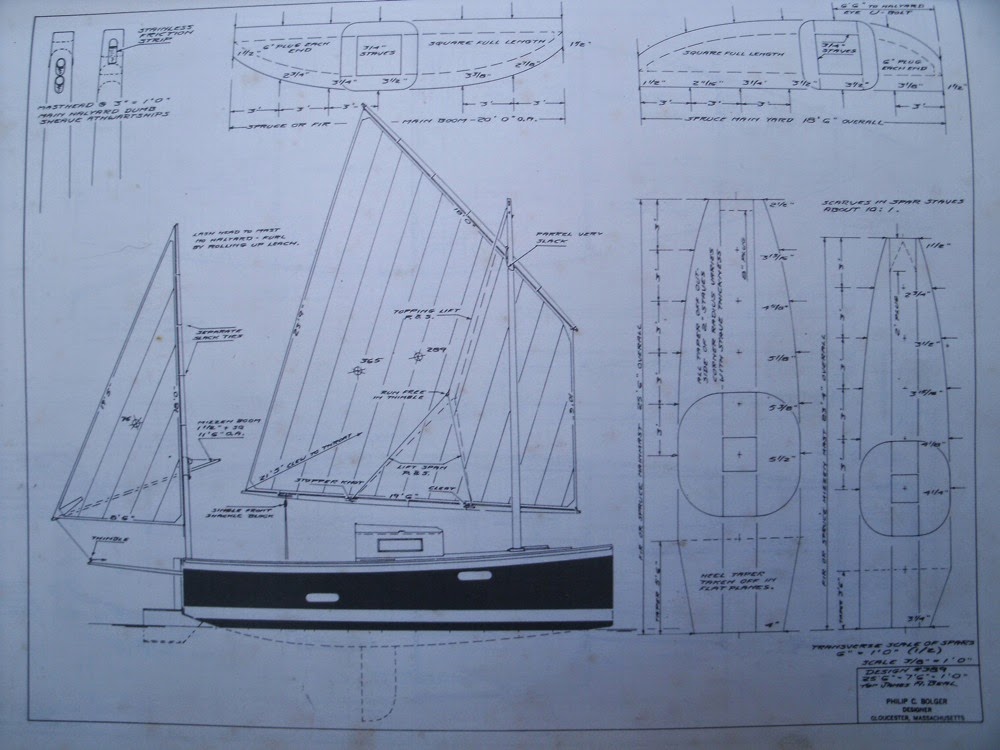