Fatty Goodlander has a new book out... 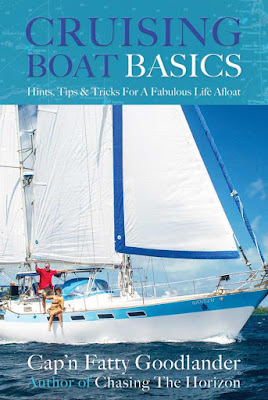 I'll let Fatty tell you more about it.

What looks like a very nice CAL 34 for not a lot of money... 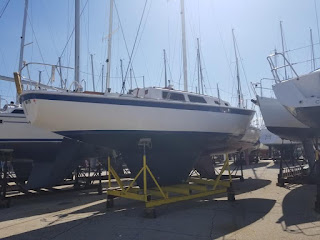 An opinion of note...

well, of course, there are always going to be some exceptions...

Truth is, I never feel very comfortable with the concept of rules and there's a line from a book I read in high school that has stuck with me even though I no longer remember the name of the book or author who wrote it...

Words to live by or, at least, an apt line for a t-shirt. Maybe not an exact quote but I'm pretty sure it's close.

One of the reasons I'm attracted to the whole concept of VolksCruiserish mayhem has more than a lot to do with the fact that by its very nature flies in the face of what people say you can't do. Maybe it's just me but nothing whets my interest in doing something like someone telling me it can't be done.

Over on that hive of negativity, idiotic one-upmanship, and consumerist blather, there is a current thread about cheap boats which just makes me want to go out find a funky, free, derelict fixer upper to rehab just to prove it is doable and that the nay-sayers have their heads up their asses.

That said, the fact is that lots and lots of people have spent small fortunes trying to rehab old boats and wound up with nothing to show for it but heartbreak, tears, and an empty bank account. So, though I hate to admit that the nay-sayers have a point, I have to say that some of their arguments are valid.

It's just their conclusions that are wonky.

Which, sorta/kinda, brings us around to my saying the word... RULES.

In my mind I see rules as being somewhat flexible. Yield signs rather than Stop signs if you will. Yield and stop signs are not so much rules but warnings. My last post was/is really about warnings that in rehabbing an old, cheap boat you're on a road that is part and parcel going to take you deep into Robby the Robot territory...

Which is a place you need to consider your options seriously and look both ways before jumping in.

You can do just about anything you want to and, where boats are concerned, I've seen so many impossible projects happen successfully against staggering odds that I never ever say something can't be done.

Of course, I've also seen an equal or greater number of total disasters and failures. Almost always not  because the projects were impossible but simply that there was a general lack of critical thinking and an excess of rose-colored vision in the situational awareness zone.

Just because some folks have been successful is not a reason you will be too...

The fact that others have failed does not mean you will as well...

Every project is going to be unique and it's up to you to sort out your path to making it happen in a positive or negative outcome.