Not a project you should be looking at...

For about a year or so I've been rowing by this Maria vintage hurricane catamaran and wondering how I'd go about sorting out it's issues. Of course, that was before it sank... 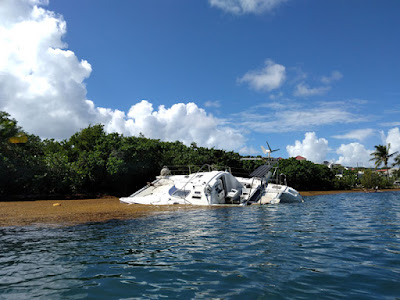 Bringing such a boat back from the dead is a lot easier than most folks think but a lot harder and more expensive if you don't have a plan, needful skills, and the time/money to complete the boat in a timely manner. Success on such a project is all about money and time.

The thing is your plan tends to shape the cost of the project while your skill-set defines the time and together they all add up to whether a project is viable or not.

The guy who owns the boat told me he'd paid $15K for the boat which in my mind was way too much for a hurricane boat that had been holed in a few places, sunk, and without a rig. While repairing the beast was pretty straightforward the time and costs involved made it just too expensive to be flippable for a profit which pretty must killed any interest in the boat for me. However, the owner had plans to rebuild it as a houseboat/hangout zone so it sorta/kinda made sense.

Of course, time being a factor, the fact that damaged boats will continue to degrade until they're fixed, and boat left alone afloat is an evil cocktail that tends sneak up quickly and ruin your whole day/week/month/year before you have a chance to say WTF!

That said, I'm sure a lot of folks would look at such a project and think it's a VolksCruiser just waiting to happen with a little sweat, a few gallons of epoxy, and some paint.

I'll delve into the why it ain't VolksCruiser material in a couple of days.