Just a couple of boats in an anchorage...

A while back, a guy I knew dropped me a line from Ushuaia down at the tip of South America and he was just a little bit perturbed. As it happens, the reason for his upset is that the boat anchored next to him was a Westerly Centaur, a 26-foot bilge keeled "family" cruiser, not unlike this one (though I expect without the bikini clad helmswoman) 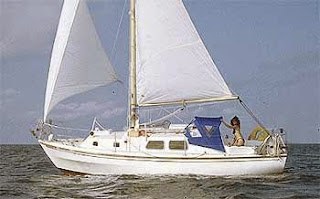 My friend, on the other hand, had a big go-anywhere serious cruiser by Garcia. A very expensive boat that had been designed just for cruising such out of the way serious places like the tip of South America and the lower latitudes. So, to find he was sharing an anchorage with such a humbly-pedigreed design had him all kinds of out-of-sorts.

Made worse, I suspect, when the elderly couple rowed over to bring him some freshly-made scones and to compare notes about their respective voyages as they'd both come from the same neck of the woods and sailed, more or less, the same voyage to find themselves together in that same particular harbor...

Fact is, he mentioned there were a lot of "surprisingly" small modest boats doing the Horn that year almost all with little fanfare and precious little man-against-sea posturing.

Which just goes to show that pretty much anywhere you go there will be small boats of a VolksCruiserish sort scadalizing the anchorage.
Posted by RLW at 5/04/2015 10:36:00 AM